skip to main | skip to sidebar

Tell a friend to go to Hell!

If you enjoy this, pass it on to a fellow member of the Long Gray Line. Share the laughter. Lord knows we need it these days. I've created each page of The Big Book of West Point Hell as an individual post. Click on the image and expand/print it. Please rate the pages! I want to declare an all-time best page. I want to thank Bill Bradford, Jason Dempsey, George Hegedus, and MAJ Gruner.

If you want to reach me, visit my "real" blog. Or you can email me here. Yes. I am a grown up now (kinda) and have a job. Life is Hell...
INSTRUCTIONS: CLICK THE PICTURES TO SEE FULL SIZE!!!
THERE ARE 52 PAGES!!! CLICK "OLDER POSTS" TO SEE MORE!!! 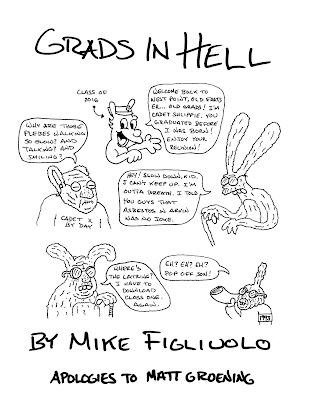 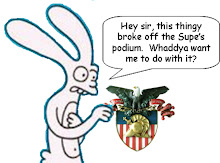 The Chapters of Hell

What the Hell is this thing?

It was TEE time my yuk year before Christmas break. We were all hating life. After all, it was 1993 and we were stuck at West Point during the grayest days of the year.

I grabbed my roommate's Matt Groening Love is Hell book, traced a character or two (I can't draw for squat) and had him say some snarky anti-TEE stuff (for the uninitiated, TEEs are Term End Exams - everything in the military has an acronym). My roommate cracked up. I drew some more. Our friends cracked up. By the time I finished 8 pages, I had blown an entire day of studying for my Physics 101 final (I wasn't going to do well anyway so I didn't see the foregone time as truly detrimental). My friends and I thought they were hilarious.

I gave them to my buddy who was on The Pointer staff (the cadet humor magazine). He loved them. He told me to change the names to protect the innocent and remove the profanity and he'd publish them in the next issue. Yearlings In Hell was officially born.

My friends and I wrote more of them for the next 2 and a butt years (obviously it became Cows in Hell and Firsties in Hell). It told our story. It made us laugh. It got us out of those cold gray walls for a few hours while we drew. We made others laugh and helped make West Point a more tolerable and survivable place.

15 years later, I bump into people who were at WooPoo while I was there. Invariably they say "Didn't you draw those cartoons?" "Yeah, that's me." "Thanks! I appreciated the laughs."

So I'm posting the compendium we threw together in my last semester at West Point. We called it The Big Book of West Point Hell. I hope you enjoy it whether you're an old grad or a new smack who just got his or her head shaved on R-Day. The humor of that place is timeless.

I was fortunate enough to return to my rockbound highland home a few months ago and spend some time with cadets and college students at the National Conference on Ethics in America. I'm proud to be affiliated with such fine young men and women who keep me safe. Thank you. If I can make you laugh with these, consider it a gesture of appreciation for what you're doing.

I'm doing this for the Hell of it

I'm not doing this for money. This is not for profit. Instead, I'd ask you make a donation to the USO to support our soldiers who are supporting us. If you can afford your computer and internet connection to read this, you can affort to send them a few dollars. DONATE HERE!